Soundmaster Group is pleased to announce a major addition to our ATOM core that is
applicable to all ION systems installed worldwide without any hardware modification. The Soundmaster ION Network Interface is a hardware/software extension that connects via an ATOM RS 422 port and adds extensive, powerful ethernet networking functionality to the system.

This tiny hardware unit packs a major punch, including:
• Avid Satellite Link integration for current Pro Tools versions. Soundmaster ION appears like another Pro Tools system to the Satellite Link network administrator. As a result, full motion control (including our exclusive reverse play feature as well as jog and shuttle) is available from all ION user interfaces (including VIRPAD, VIRTOUCH, SHUTL and the ION Touch Screen) as if the commands were given by a Pro Tools system. External controllers integrated via ION (such as the Avid System 5 console) concurrently gain full motion control as if they were Pro Tools systems as well. Hybrid environments such as Avid S6 with Harrison MPC or AMS/Neve DFC can now be seamlessly integrated.
We’ve eliminated waiting for the Pro Tools recorder(s) and players to lock via 9 pin or time code. Instead, typically 1/4 second after the system plays you will hear sound and can punch in. This works with any console that is equipped with Soundmaster ION. There are numerous other benefits from this exclusive network integration. For example, during looping we can automatically take the Pro Tools recorder(s) offline and/or interrupt the time code feed to the console so that automation isn’t affected. We have also been able to solve other issues that users have experienced over the years because we are inside the Satellite Link network command structure. Clearly, this method is far superior to various workarounds that our clients have had to resort to in order to integrate Satellite Link devices in the past.
• Powerful wireless control over ION from devices such as tablets, smart phones and laptops via a Soundmaster ION intranet. No app has to be downloaded as the user interface is browser-based. Imagine controlling the system with your Android or iOS device during a client screening or adding yet another way to send Avid Satellite Link transport commands!
• A very sophisticated screening/note-taking application (see next page for more details) that, unlike stand-alone apps, is fully integrated and synchronized with the system. Footage information accurately reflects different film reels and a mixer can even monitor everyone’s notes in real time while participants maintain private channels. Furthermore, you never have to key in a footage/time code number again since all the note data appears in the ION EDL and can be automatically executed.
• Also included is our exclusive Audience Response System that provides for separate male and female streams in test audiences to express their „like“ or „dislike“ at points in the program while producers watch a real time graph of their opinions! At the end of the
screening all time-stamped responses can be exported for detailed analysis. This can be a new revenue stream for our clients.

Soundmaster Group unveils an interactive application for tablets, laptops, netbooks, smart phones or any other device with a standard browser. No special plug-in or app download is required as the user simply logs into the Soundmaster ION wireless intranet. Especially suited for screening and spotting sessions, this exclusive functionality is bundled into the ION Network Interface which brings ethernet capability to our ATOM architecture.

Dialogue, ADR, Music and Effects buttons
With one press, these buttons mark the footage (or time code) and automatically append the respective words. A generic „Mark Time“ button is available should you not wish to annotate the footage with one of the above words.
Louder Softer
Add Lose
Check Sync Use Original
These remarks can be used in conjunction with any of the main buttons.
In addition, or alternatively, comments can be added as desired.
• Each user is automatically assigned his/her own private channel when logging in.
• A special, confidential portal is available for the mixer to monitor all users’ comments in real time if desired. This can give the mixer an opportunity to be better prepared to deal with requests when the screening is over.
• At the end of the screening, a facility exists for downloading the individual user’s contribution in order to correct typos or for other revisions. Basic text editing can be done right in the browser. If spell checking is desired, the file contents can be copied and pasted to the user’s application of choice, modified and then copied and pasted back into the browser window, with an ability to upload the revised text file to the ION Network Interface. A composite of all users’ contributions can be imported into the Soundmaster ION EDL and directly executed (i.e., a GOTO can be given to the marked value).
• In conjunction with the existing Soundmaster ION automated screening routines (where the under screen counter footage is reset at every reel change automatically), comments entered into the ION Screening App will be automatically stored referenced to the correct reel number. 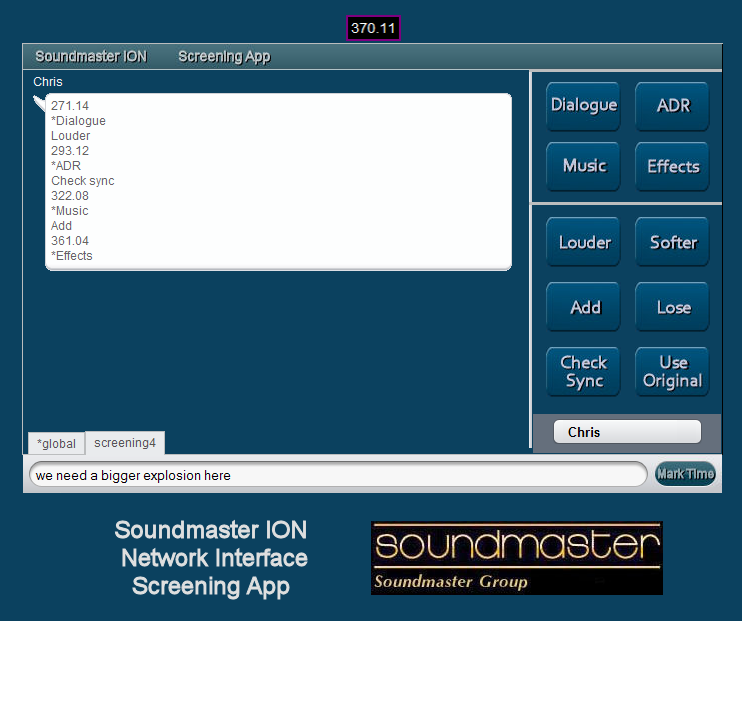